It's been a year since Ratropolis' debut on Early Access.

The original plan was to update the Navigator in October, but since all the leaders have been remake.

We prioritized switching the game from a remade mode to normal mode.

There was a delay in the next update as well as the DevDiary.

First of all, we apologize to the players who have been waiting for the next update. 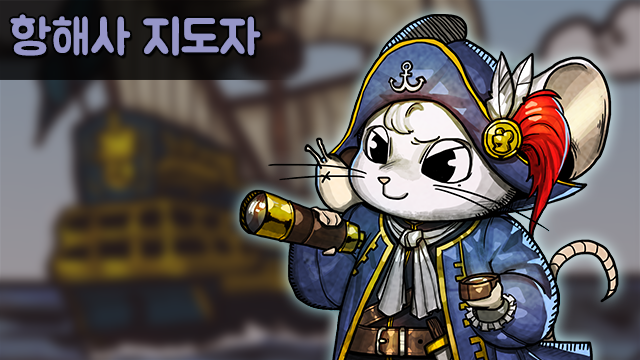 This time, by adding a mechanism to enhance the characteristics of the navigator leader,

we made risk control easier, so players can manage a more stable return.

We have also noticed some players enjoy using multiple cards in combination in normal mode.

We allowed the Navigator Leader the ability to bring cards from other leaders.

- Take another leader's card and make it possible to combine it.

- Put a limit on the number of times the card can be used, forcing player to consider when to use it.

- Increase cost of the Card each time being used, forcing player to consider when to use it.

- Give various directions in Deck building through missions and rewards.

- Strategize the time of redraw, and consider the time when the card cannot be used.

- Make use of the loot chest.

With the above goals, we have re-designed over 90 cards,

added a new mechanism and different styles of play.

Stock is a mechanism that limits the number of uses to a card.

I wanted the Navigator to use card as resource,

I wanted to encourage them to get a lot of cards from the market or loot chest.

However, in Ratropolis, you can quickly reuse cards by re-draw,

The stock run out quickly, resulting lowered tempo of the game until acquiring a new card.

Thus, we drastically lowered the basic stock of cards,

Added features to increase the stock.

For example, Leader ability now increases the stock of cards in hand. 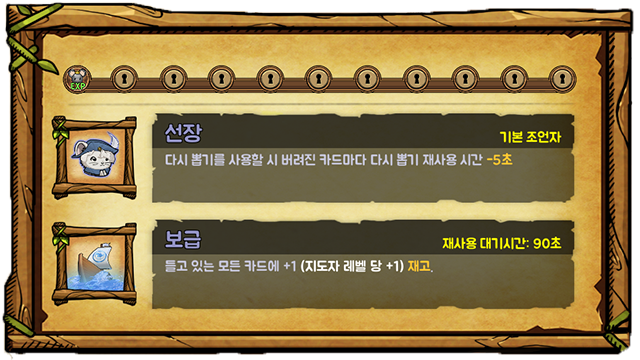 < Remake on the Navigator's leader ability >

< The icon displayed in the upper right corner of the card indicates the number of available uses. >

With the addition of several cards that can increase the stock,

We added cards that improve abilities in proportion to the amount of stock accumulated.

Through these cards, players can collect stock and use the card at a critical moment,

or consume quickly, and gain advantage as they move on.

< Cannon fire could be bombardment or just a couple hits based on Stocks left. >

Notoriety is the mechanism by which the cost of the card keeps increasing every time you play it.

If you have plenty gold coins, continue to use the cards.

About card's efficiency, you need to calculate the increasing cost to use it effectively.

Notoriety plays a role in limiting the number of times a card is used, just like stock,

I like it because it gives a very different feeling from stock.

< Notorious cards have the same basic cost as 0. >

If the notorious card is combined with the card lowering the notoriety of cards, you will have very high efficiency.

This time, the Quest card has also been remade.

We saw cases where rewards were not as tempting.

For example, we want the military quest to have military reward, instead of building advantage, etc.

The conditions and rewards of the Quest were fixed in a related way.

Before changing the leader ability, past navigator's ability enhanced the reward.

Now that reward enhancing is gone,

It was easier for us to bring new rewards for the Quest cards. 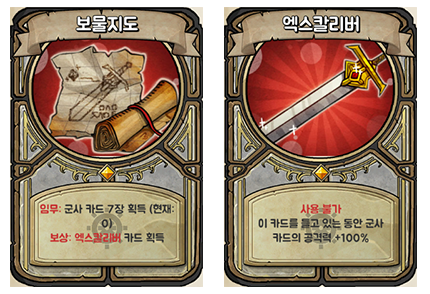 It was also cons that the Quest card is used as a consumable.

We wanted to make the Quest card spin in the hand,

In that way, an old idea that would suit the deck building game reappeared .

We decided to implement the Artifact Mechanism, which provides a powerful passive effect.

Since it is effective only when you hold it in your hand, it seems to be a key factor in how to compress your deck.

In addition to this, cards that can be used by bringing other leader's cards,

Cards for which the effect is activated when the card is not used for a certain period of time,

Cards that make use of lot boxes or can only be obtained from loot were added.

< Cards that can be played for unique plays >

It's not easy because the balance of the game changes little by little every time a new card appears.

For the above reason, I try to refrain from adding any more cards.

After completing the remake of the the navigator leader,

the remake of the advisors was carried out immediately.

Among the existing advisors, the most problematic were military advisors,

because they gave special abilities to certain units in the game.

In the early planning stage of development, we wanted to evolve new abilities when reinforcing units,

This took too long to develop, and was replaced with the advisory's ability to give special aids(stat bonus).

However, in many cases obtaining a military advisor would be useless

if the military unit associated with the advisor was not used in the deck.

Previously, we added the associated military card to your deck, when an advisor was obtained.

During the development, we found out that for players who did not want such military unit,

adding a military card along with advisor would get in the way.

Also, the number of military types has increased by nearly 10 times, making it impossible to give each of them special abilities.

To make up for the above problems, we removed all of those advisor abilities

and replaced them with effects that would benefit the player universally.

In addition, dedicated advisors were set up for each leader,

so that each leader's unique mechanism and synergy were created.

I am certain this will help in enhancing the characteristics of each leader.

< Currently, we are working to make the advisors appear as characters walking around the city. >

In addition to the cards introduced above, we have added a number of new general(global) cards to other leaders,

The appearance of the city hall has also changed for each leader.

A lot of new advisors have been added as well, so the game volume has grown satisfactorily.

That's why we decided to replace the Normal Mode with the Leader Enhancement Mode,

which had many functions modified and added over 6 months.

Cards unlocked in normal mode are considered old version, so card unlock in the game had to be reworked.

The problem was that in this process, the reset of the users' progress was inevitable.

It was all done to progress the game to next level, however, I felt very sorry giving many users a sense of loss.

I would like to ask for forgiveness, and apologize for a sudden reset.

In the next episode, we may bring up the Staged difficulty system(Ascension) and news about the Official release.