Hello all! This is Cassel, the lead developer

Due to the Covid-19 pandemic, all the scheduled gaming events in May were canceled.

May was a month that our good resources were put on development.

Following the remake of the Merchant leader, the General leader was scheduled.

In this journal, I will briefly introduce you updated contents 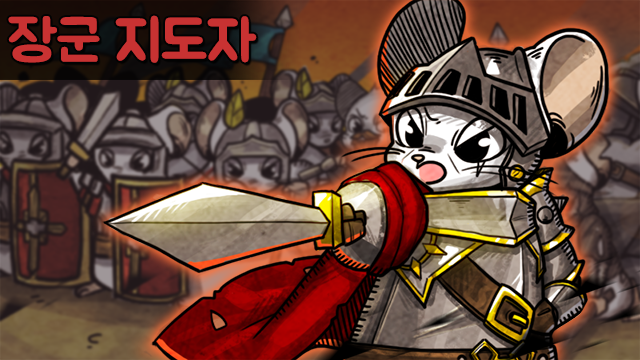 < General Leader is all about training and strengthening troops ! >

General leader has a strong ability tied to military cards,

It's an amazing leader, easy to play, and loved by players as many beginners pick him for first play.

Thus, we tried to stick with the concept of the current Leader ability,

and focus the remake on new Military cards

-   Utilize the bounty obtained when defeating an enemy to ensure steady supply of gold income.

-    Make it possible to manage/keep soldiers in good health, instead of steadily losing health.

Let me briefly introduce new mechanism we added this update.

Well, the current growth mechanism associated with Squire, and Bachelor card upgrade as time passes on.

Squire which survived battles after deployment grow to Bachelor, and eventually Royal Guard.

We wanted to show how deployed units get tough as they experience multiple battles. 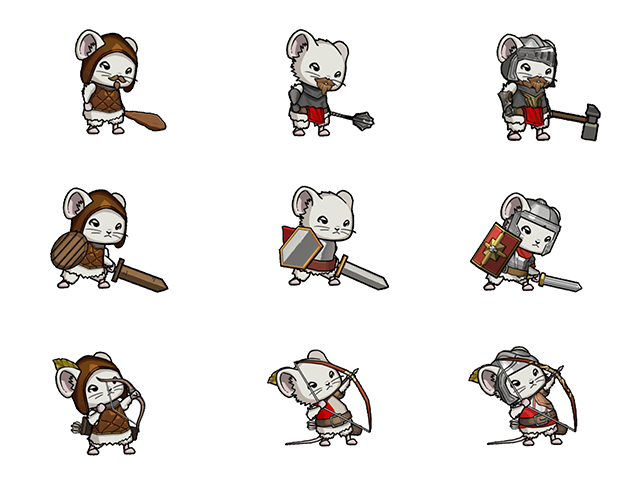 < Units with Growth tag have 3 stages >

Growth units, like the Service unit of Merchant Leader, have a purple growth(exp) gauge below the health bar.

Whenever an enemy attacked by a growth unit is killed, 1 growth experience is accumulated.

If the growth unit fills the exp bar, it is converted to the next level military card,

which is then put into the card bag.

(For those who wonders, Max exp is displayed on the card)

< When the growth bar is full, the unit returns to the card bag with doubled ability >

However, there is one concern in this mechanism.

This is because the tide of a battle could suddenly change when a unit moves into your card bag during combat.

If we let the unit replacement happen during the combat,

There is no way for players to check the ability of the grown unit.

Secondly and most importantly,

There was a problem with not being able to receive some special effects such as the ability of the leader.

We've also thought about not returning the unit into the card bag if it's in combat.

It is difficult to check the wasted growth experience and the condition of the battle.

I haven't come up with a better solution yet, so I'd like to observe the outcome of the current implementation.

Growth units are very powerful compared to other units.

In the event of unit death, it takes a long time to recover combat power, so constant management is required.

So, several cards have been added to help the units' growth.

< Combat is not the only way to increase the Growth. From left, Training Officer, Barrack, and the law of the jungle >

If Growth cards are used correctly, you can grow units very quickly.

The Danger card is a new addition to Disturb cards, releasing enemies when used.

You can obtain Bounty or give exp to growth units by defeating enemies that appear from Danger cards.

Initially, instead of ‘Acquiring a Danger Card’, the above cards were given the ‘Add 3 enemies.’

However, during the test run, I suddenly thought that it would be good if the enemy appeared using the disturb card.

It seemed to be more appropriate for the game.

It gives the player various options to manage risk in play.

Strategy such as removing Danger cards through Discard, or

Delaying its use until the city's defensive forces are strong enough can be chosen.

Enemies generated by Danger cards will level up at wave 11 and 21.

It is advantageous to use them before the eleventh, to avoid facing powerful enemies.

The elites appearing in the late game are more powerful than expected, so used them with a caution.

Also, players need to be careful not to enhance the Danger card with the random card enhancement effect.

Danger card simply adds an enemy to the battle,

which we are very excited about.

If you can understand the capacity of the city's defenses,

and deal with the Danger accordingly, they will be the most handy ones.

In the past, I always wanted to utilize the movement of units in the game.

Of the 6 leaders, the General with the role of commanding the unit would be best suited for this,

We decided to add the movement elements to the general leader.

Movement cards are cards that the benefits the unit(or player) as its movement speed increases.

Among the initial concepts, the Cataphract(heavy cavalry) card was developed first.

Who would not like to experience charging power at the full movement speed?

I know everyone loves to watch the Rohirrim Cavalry in the Lord of the Rings smashing and cutting infantry line.

< Just looking at it relieves stress >

For the Cataphract, we wanted to use the concept of pushing enemies through a full charge.

But pushing enemies caused errors, a system that has been a trouble since the past.

Ally units would push enemies off the cliff like King Leonidas and his 300 Spartan soldiers.

It caused stress for players as battle field stretch far and infantry units chasing enemies out of control.

For the reasons above, push effect disappeared in the game in past.

However, the heavy cavalry that couldn't smash and break the enemies wasn't what I wanted.

At first, we tried to solve the issue by changing of AI to stop chasing of the enemy.

The root cause was that the allies were pushing the enemy “repetitively.”

Endless loop may end if push command would not be used over and over again.

So, the motion for Cataphract(heavy cavalry) is very similar to that of a Duckling Rider

which has a reduced attack frequency but applies a special attack method to cut enemy and comes around.

A double safety measure was applied; the effect of push only appears after charging a long distance.

However, even with these constraints, the same problem occurred when 5 or more Cataphract were deployed.

So, we drastically reduced the movement speed of Cataphract and

adjusted the movement method so that it accelerated only when charging.

That way, the cute Cataphract finally was completed as an attractive unit.

< Do you think the charge should go on and on? It's a shame that Cavalry turn around so quickly. >

Aside from Military cards, I wondered what other benefits a player could gain from using the movement speed.

I wanted to make it possible to gain economic benefits from moving speed.

The idea of tollgate building came up,

The faster the unit moved, the more gold coins the unit pays. So it seemed like a good mechanism.

I was kinda worried about whether I could put such a notion in system, but when I applied it, it was more fun than I thought.

So buildings with similar features were added to the game as well, making it possible to gain high gains through movement.

It's fun, but the hassle of having to move the unit yourself remains.

As well as there are still concerns a play that focus on unit movement rather than playing card for strategy.

It would be nice if there was a way to improve this.

Coloring buildings with pretty colors or matching tone was all that mattered.

We kind of overused decorations used in the building, to make each building distinctive.

But as the number of buildings featured in the Ratropolis increased,

It was no longer possible to use new colors and decorations

Buildings similar to each other emerged, making all less distinctive.

It became difficult to see at a glance what each building does.

Suddenly using metallic color or organic materials did not match the theme of Ratropolis.

So, the materials, colors, and core colors of buildings appearing in the game have been unified.

Then we reworked each buildings according to its distinct function.

Re-defined the core color rule upon rework, modifying any that didn't match.

After making these modification, a whole sense of unity was seen in the buildings side by side.

It is also designed that people can tell strategy by looking at the city from a distance, when watching Streamers play Ratropolis.

I am just thinking this, but If an additional bonus is added when a section is filled with buildings of the same color in the future,

it could be fun.

In addition to this, we have taken a step forward by improving various UIs and

inconveniences that users have requested.

Next is the Architect's turn.

There were many units from the general, many buildings would have to appear from the architect.

The Architect leader's rework is designed to look alike the tower defense.

Are you not curious how we could bring the tower defense into this side-view display?

In the next journal, I'll bring you exciting tower def... oops, Architect leader!