I 'm so excited to introduce you the Navigator, the 6th Leader of Ratropolis.

6th Count completes the addition of the leaders we planned initially.

In this diary, I will introduce the navigator leader and the newly added cards. 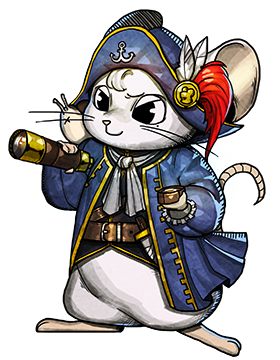 < This one is a truly adventurous leader >

There are cards that give instantly high profits may return smaller profit at the next use.

or Cards that give small profit at the moment, but yield a higher gain in future use.

These cards may require player insight because their value changes over time.

< Concept is clear, it comes with both Pros/Cons  >

Our initial intention was to make card Selection difficult depending on situations.

As I created these cards, I felt that the characteristics of the navigator were a little weak.

This is because cards such as <Investment> and <Mining> already has the value change characteristics.

So I was wondering if there were any other factors that would be unique to the navigator leader,

Came up with combing the effects of loot chests with the Navigator cards.

Because we loaded an existing system, the implementation was done in a short time.

Additionally, the character of the navigator leader also seemed appealing.

Surely, it is a big responsibility for me to add military card for Navigator.

As far as the Navigator concept is concerned, adding a combat unit was a difficult work.

It would be great if a ship appeared.

But, it was difficult to implement in the current system, so we made it up with ground units.

The navigator's military units, like other navigator cards, vary greatly in value depending on time or situation.

Some are very powerful in the early game, but hard to use in the later stage or

Personally, I would like to add more navigator-related military cards, but I am running out of a good concept.

If you have any good military ideas please let me know in the comments!

Mission cards are a new kind added with this navigator leader.

This emerged in the process of thinking about what ability fits the best as a navigator leader,

Finally, the Navigator ability was to bring 1 of the mission cards.

When planning the ability of navigator leaders, we spent a lot of time.

Because like the Shaman Leader's 'Soul', I wanted to introduce a new mechanism.

Or an Artifact mechanism that provides a powerful passive effect when held,

or unique linkage event appeared in the initial development stage.

However, these ideas were far from the High Risk and Return concept of the navigator.

I wanted an ability that will clearly show the main concept.

Of the many ideas, the mission card idea was the best fit.

A mission card is a card that gives you a powerful reward when you fulfill the card's conditions.

It has a similarity to the Quest Card in <Hearthstone>.

But there is difference, the Ratropolis version of mission card takes up space on the card deck.

The big drawback is that you can't use these cards until the mission is complete.

It acts as an obstruction that interrupts the player's deck cycle

until he completes his mission and earns a reward.

It puts a risk on the player.

Instead, I wanted to give him a strong reward, making it worthwhile to carry out the mission with risk.

The Mission and rewards are randomly combined from among 20 to 30 condition/reward list,

Enabling players to select mission based on circumstances.

It is up to players to select and proceed missions of different values.

It was also a headache to determine what benefit would be better with level up in leadership ability.

Increasing the mission card on each leader ability level was overlapping with the ability of Scientist.

It was obvious that the player would not make a challenging choice.

So we decided to increase the reward quality of the chosen mission card.

The basic passive effect is to expand the pool of selective cards when choosing a card.

The navigator can view 1 more option than any other leader when picking up loot crates or selecting missions.

It seemed appropriate for the mission would require various cards.

When I alpha tested the Navigator, the initially determined leader ability was overpowered.

So several adjustments were made to weaken the navigator's ability.

As for ability, the selective mission cards has been reduced from 3 to 2.

Resetting Leader abilities through the Loot Chest has been removed.

Even after these adjustments, Navigator has a strong potential and we are expecting brilliant plays.

From the past, I was worried about the result of adding new cards.

The appearance of new cards may effect the chance of each card draw.

And many users have asked for the function to set the cards that appear in the game at the menu.

We decided to implement a temporary solution:

Card Lock/Unlock function at the leader selection menu, so they don't appear in the game. 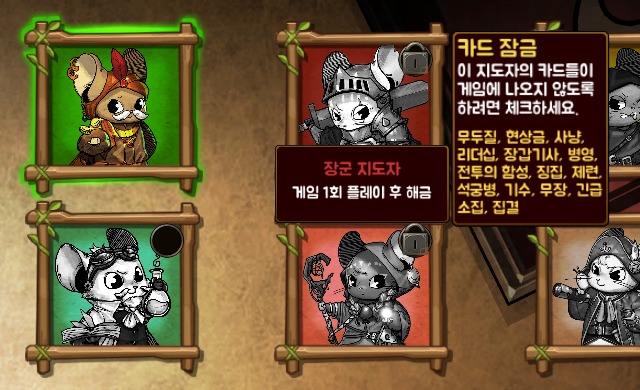 < Please understand this temporary measure, we plan to change UI in the future. >

Implementing Card Lock on manual level is complicated because we need to create new UI resources.

As temporary measure, we decided to group the card based on each leader.

The Card Lock System allows players to decide which leader's cards to play before starting the game.

It would be easier for the player to intend his game play.

After this system, we are developing another game style;

Playing the game only with the leader's own cards.

It seems that the Card Lock will be useful when this is added later.

This month we plan to implement additional new elites by region.

I'll add a lot of bosses and elite enemies to repel repetitive play and add some fun.

See you next month!