Hi! This is Cassel, the lead developer of Ratropolis.

I hope you all stay safe and keep an 1 meter distances as Epidemic of Corona Virus and Typhoon is out there.

I will start the diary with the Shaman leader. 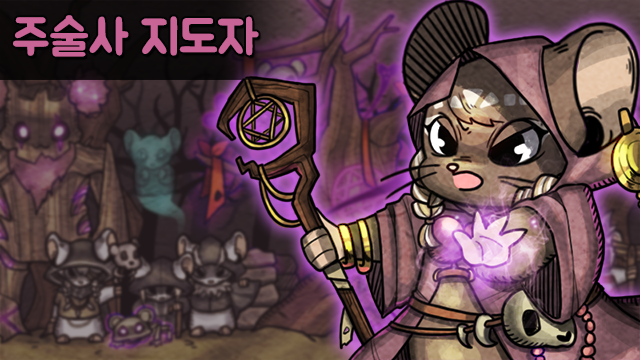 < Shaman Leader collects Soul and uses it as resource. >

When units die they drop Soul which Shaman accumulates to enhance the effect of cards and buildings.

Since we know that Shaman leader has a very unique maneuver compared to other leaders,

We agreed to not change the leader ability. Instead, focused on Soul cards to offer various play-style.

- Make most use of its unique resource, Soul.

- Provide a Special move; Give high DMG when firing a Soul skill card with collected soul.

- Allow Soul to be produced, managed or operated.

- Deploy cheap military units in an instant to make it possible to acquire many souls.

- Increases the battle time. Give a card that deals damage over time(DOT) or damage after a certain period of time.

- Weaken the strength of coming wave with various debuff effects.

With the above goals, we have re-designed over 60 cards, and added 3 new mechanisms

Upon release, using the Soul Reaper or Release card was mainstream.

A simple strategy of killing enemies at once, was used already.

we added a mechanism to kill enemies by dealing damage over time(DOT).

So Shaman can played in a different style than before.

When I thought of a system that deals DOT, I immediately thought of element type,fire and poison!

and ‘corruption,’ the infamous warlock skill from <World of Warcraft>.

Fire and poison were already being used in the game.

So we began working with the 'corruption.'

However, when I was trying to create illustrations related to corruption,

the content was too violent and difficult to show appropriate expression.

So, instead of corruption, it has changed to curse and development proceeded. 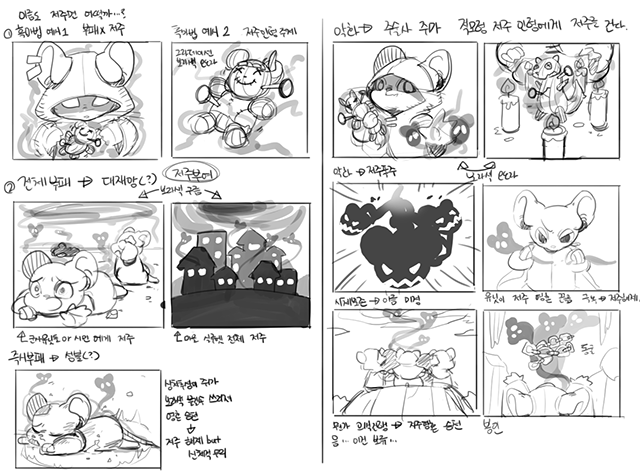 Curse takes the effect every 5 seconds of which the number of stacks matters greatly.

For example, a unit with 10 stacks of Curse will take 10 damage every 5 seconds.

Curse does not have a duration, and no other effect reduces the number of stacks.

That's why enemies with the curse will eventually die after time.

If the player can endure long periods of time, they can easily win.

As we developed the curse mechanism, also added card associated with curse.

Some give curses to allies for additional effects,

and some have the effect of reducing the frequency of DOT.

< Cards that apply the curse >

Next, we wanted Shaman to withstand enemy forces.

We decided to further strengthen the debuff the early shaman leader had.

< You can earn time by distracting your enemies! (Pollen/Beehive/Tornado)>

Cards above are highly compatible with curse cards. Use them together to maximize the efficiency.

Early shaman leader had a summoning card, but the mechanism was very poor.

Fire and Storm Spirit card was a magic card that buff ally, instead of summoning existing units.

So this time, the real unit is to be summoned.

Summoning is the ability to spawn military units without the user directly playing military card.

These 'expendable' units will reduce the loss of friendly units, and last longer against elite waves.

Also, when the summoned unit dies, a soul is collected.

So a considerable amount of souls can be managed each wave.

< The game flow depends on how well you use the Skelraton. >

Summoned units do not occupy the number of citizens, you can have as many units as you want.

However, if too many Summoned units are piled up, it can burden the progress of the game.

They needed to disappear after a certain period of time.

We still wanted Shaman to use the summoned unit as the main axis.

Adapted mechanism of gradually losing health through a curse, causing them to die.

Then added card that benefits summoned units by healing HP or dispeling the curse.

The cards related to the summoning seem to be insufficient, so there is a room for improvement.

If you have a good idea, I would like to enrich the summoning mechanism with more colorful cards.

Sacrifice is a mechanism in which friendly units are killed to give an effect.

I thought it goes well with shamans in that you can get souls by killing friendly units even during non-combat.

We decided it was a very suitable system for the Shaman leader who could summon units.

< Cards that sacrifice your soldiers: Offering/Necromancy/Cannibal >

These cards are highly efficient at the beginning of the game, but

Abusing it can become the last round for you, so use it appropriately.

It is difficult not to abuse! since I can kill my own rats.

I felt like I learned a lesson on how the tyrant was born.

Now that we have recruited a new sound designer, we plan to change the sound effect little by little.

Finally, it is the turn of the last leader, the navigator, to remake.

Please keep in mind that we are expecting more modifications than prior leaders.

I hope we can deliver the wonderful news on the Navigator leader next month.

Thank you for reading the long article! Have a nice day.