As COV-19 is prolonging, I have spent most of March quarantined and working home.

I hope you all take care of your hygiene and wear masks at all time.

Let's hope that this crisis pass on before summer.

Meanwhile, we added new bosses and elite enemies to the Ratropolis!

We would like to introduce you the progress on 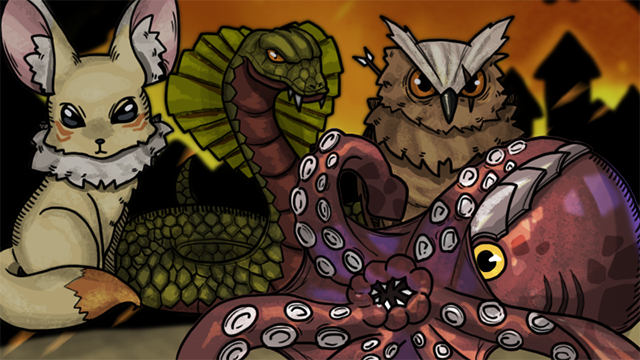 Enemies appearing in the Ratropolis are classified into Normal, Elite, and Boss according to their abilities.

Bosses are so powerful that it may disable the defensive force and force a player to restart the game.

Of course, the goal of Ratropolis is to defend the city from these enemies, and

give Players fun as they develop defense strategies and successfully defend each waves.

However, since we have a limited number of bosses in-game,

We recognized a problem that the defense strategy against boss is also limited.

To improvise these limitations, we decided to make more bosses in the game,

We wanted the humans to have fun of selecting various defense strategies at each game experience.

So this time, we added 7 types of Bosses with different abilities...

< The gigantic Python is a meter across, with an appetite for rat. It heals as it devours! >

In the event of the bosses, I wanted to give the feeling of brotherhood:

So, we removed the normal enemies that appeared together or made the minimum number of

normal enemies to be on the battlefield when the boss appears.

Making it look more like a boss chamber and boss raid was our intention.

The attack power and Health point of the boss have been increased by almost 2 times.

In addition, the Skill effects of boss have also been improved, so that they look more fearsome.

< We are improving overall in-game graphics. >

When planning the abilities of the bosses, we had many concerns.

We wanted to induce certain actions of the player rather than creating a high HP and attack power Bosses.

Making the player to collect certain cards to counter the boss, or

to strategically locate the soldiers to avoid the boss's skills is our direction of development.

< Heavy armored SandKing blocks all attacks for a while if a player does not redraw the card. >

< Kraken devours cards in the hand for a while. >

But the fact that the boss enemies are not affected by crowd control,

or there are not many cards designed to counter Bosses or synergistic to Bosses,

So I think it will be a future task to think deeply about this part and improve it.

In Ratropolis, an enemy attack is a puzzle element that the player must solve.

However, there is a problem that the player has no notion of what next attack will be.

Unless the info is properly delivered to the player, he won't know what kind of Boss to expect.

What skill the Boss uses is a mystery until the player has first seen it.

This structure, which makes it difficult to plan for defense in advance against the enemy, was a factor

that greatly reduced the strategy of the game. 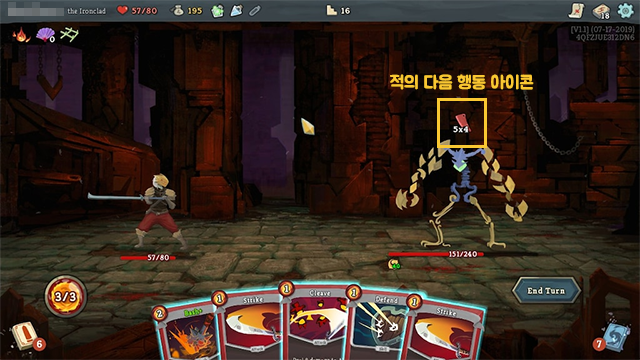 < In other similar games, it ’s very clear when and what the enemy will attack.>

I tried to think a lot about how to communicate the enemy's attack to players,

but I didn't come up with a good way.

So I looked for advice from other developers and one of them recommended me one method.

It's a way for players to learn the skills of the Boss in advance and respond to them later.

I thought this role would be best suited to the elite enemy.

< Weasel Siege Soldiers, like the Weasel Chief, have the ability to assault a Defensive Wall. >

If an elite enemy was simply a threat to the player,

Now it has an additional role that tells you which boss to expect and how to defend it.

At the same time, the time of appearance of elite enemies is set faster than before,

We've made sure that players have enough time to build decks after checking the elite skills.

Due to the addition of various enemies and the increased abilities of the Bosses,

the importance of unit movement has increased

Previously, even if you use the unit move button, you can only move to the next Defensive Wall.

There was a lot of inconvenience in moving the unit to the other side or a long distance.

So this time, we added the ability to move units to the desired defense wall at once.

< Now you can move troops to the desired defense wall at once using the button added to the Wall. >

At first I thought of using the drag and drop,

Considering the User experience in the mobile version, it was implemented as a button.

Whenever these essential features are added one by one,

I still feel that there is a lot to fix and work on.

After adding new enemies, I took a step back and looked back at the Ratropolis.

While rechecking the feedback of users,

I thought deeply about which game to develop in the future.

To make the drastic change of the game once again, and for the completeness of the game,

We have decided to extend the early access period.

We decided to take on the challenge of making big changes on leader / advisor / maps.

Thank you for your support and we will come back with remastered Ratropolis!