This time, I would like to tell you about my experience of participating in the 2019 BIC event from September 4 to September 8.

Everyone around me knew the BIC's reputation.

And my expectation was very high because it was my exhibition .

On the first day, I left for Busan by a shuttle bus operated by BIC.

It took 5 hour ride from Seoul to hotel, where I was also given a free 5 nights stay.

I checked in, unloaded my carrier, and went out to the nearest restaurant to devour food. 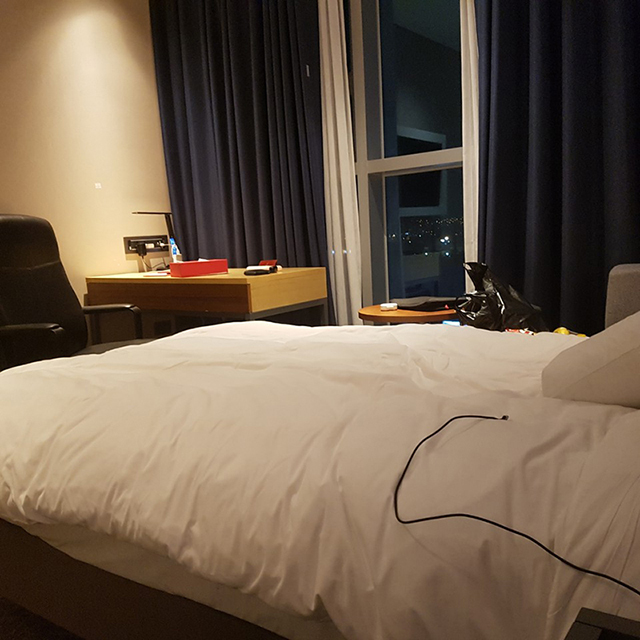 < It was not a 5★, but my satisfaction level was there. It had a sea view and the event was held near! >

After eating up a soup, I shopped for late-night snacks at a convenience store.

Returned to the hotel to have a hot bath, and committed to sleep in a fluffy hotel bed.

It was a day full of lectures for indie developers.

It took a while to walk to the BIC conference hall, which was located at a pier. I should have called a taxi.

< The view of Busan Ferry Terminal was very nice. BIC was hosted here. >

Later, I looked back, and there were people standing or sitting on the ground.

At entrance, the host handed out Korean-English audio interpreter to foreigners. 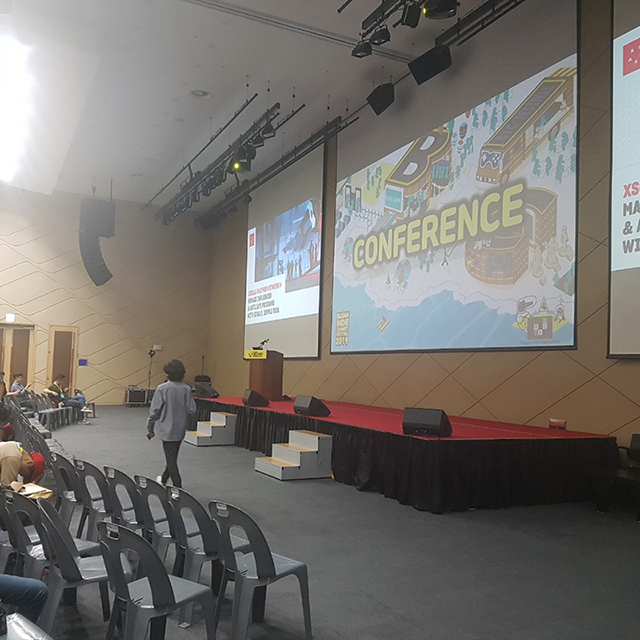 < We had 3 screens and a cool audio system! Are we singing hallelujah? >

As expected, the 6 hour lecture was boring as shell.

They might had the AC on 90°F, and I felt as if I was sober after a quality stay at hotel.

I think Koreans are really academic. Or perhaps we like prizes given after lectures.

At each checkpoint between lectures, attendees lined up after Staff giving an electronic stamp to individual smartphone.

I was pretty sure developers love to win free prizes, and I loved it.

I had some lessens learned, too.

There was a BIC night party right after the lecture.

Bus took us to a nearby place. I think it shined light too much,

but networking with other developers in the pool was an awesome experience.

Unfortunately, waiter/waitress were not available. Everyone had to order food at the arrival.

So the line was really long, and I heard they ran out of food...shortly

In addition, networking was very difficult for me because it is difficult to compliment a game I have never played before.

I wish there was introduction of each other's games instead of 6 hours lectures. 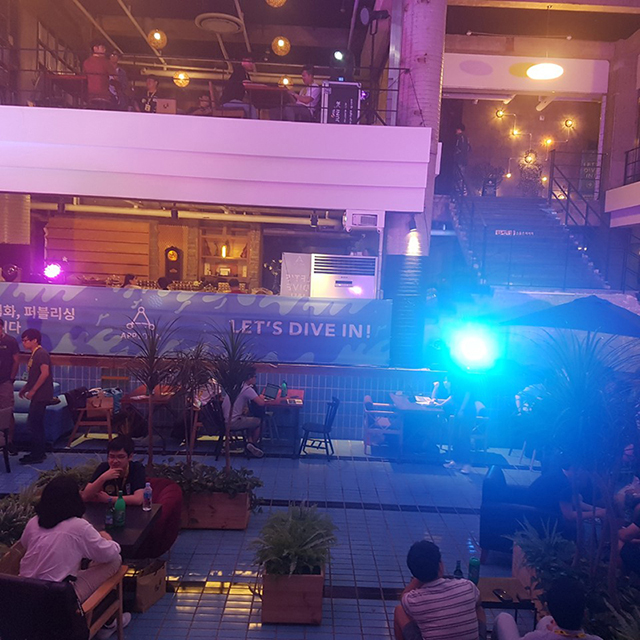 Fortunately, I recognized faces I from BIC OpenPlayDay,

We shared a table and shared know-hows on the Steam release.

Give each other feedback and advice! I was happy Ratropolis was on the topic.

Before we return to the hotel, we shopped some supplies for our exhibits.

I finished the day with a final test for the next day's exhibition.

The first day of the exhibition was the BTB day, Exhibition for business people.

We loaded our supplies and headed to Booth #13.

It could have been a spacious booth... I can only wish for more space.

I crawled under the table like a rat to move inside the #13. 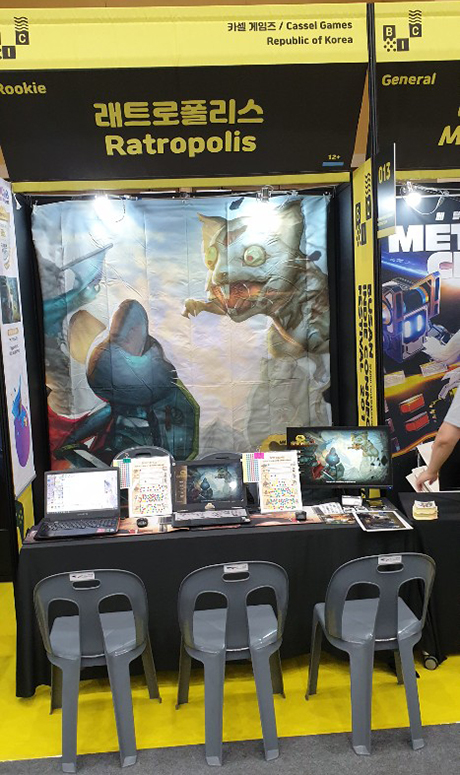 < Tip: Banners should be rolled up, not folded… >

The BIC event began in shortly with the opening ceremony.

Publishers, journalists and streamers visited us a lot on the BTB day.

We had a good time interviewing, taking pictures with them, exchanging business cards.

Foreigners often visited us, but we didn't have any problems, for Ratropolis supported English.

In the middle of event, I put my colleague in charge and experienced other booths.

I get to play exhibited games. It's now or never.

Because I played and gave feedback, other developers noticing my face did the same vice versa.

We rather play each other's game to get friendly than having a drink.

Public day has begun. For long-waited people today was the first day.

The weather was rainy, and more visitors came to the exhibition hall.

Ratropolis booth was crowded because Koreans are competitive players.

An average play time per person is about 7 minutes.

At such open demonstrations, a brief playtime under 5 minutes could been the best.

Despite our inexperience, I was very impressed and sorry that the visitors were waiting to play.

I gave electronic stamp to everyone who played Ratropolis.

If you collect multiple stamps, you can exchange them for a lottery ticket, which is traded to prizes.

So each booth was given an electronic stamp, I was your friendly stamp man.

It's environment-friendly system, and it encourages everyone to play variety of games.

During the exhibition, my honored guest DDaHyoNi was invited to the event stage.

DDaHyoNi, came up on the stage with applause, seized the audience with charisma.

He suggested that I play the game on stage with him. I had such a good time thanks to DDaHyoNi.

One hour passed away like a breeze, but I enjoyed it alot!

< Me with a MIC and DDaHyoNi on the mouse! >

I wish we had more chance to showcase Ratropolis.

Even on the last day, the BIC was crowded.

I think the best description of last day is, re-visiting to play the game once more.

Patrons of the Latropolis also visited and shared their thoughts on the game.

As we talked about cards with balance problems, Ideas for new leaders, the time went by.

On the last day, we closed the booth faster than usual and watched the closing ceremony.

In the event hall there were prize draws and awards.

Visitors were given various prizes such as monitors, tablets, umbrellas,

There were so many fun and high quality games on display at BIC,

The nominated games were also games that I really enjoyed.

As we have won this valuable prize, we will do our best to develop a star game! 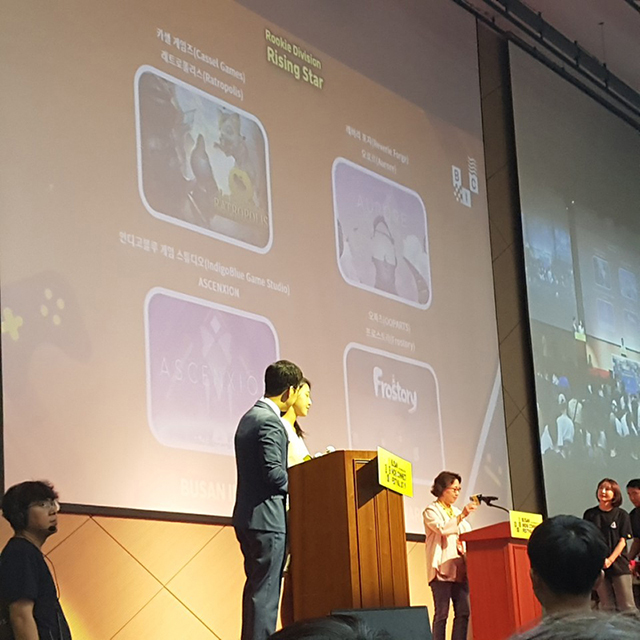 After the awards ceremony, the booths were cleaned up and we quickly returned to the hotel.

Because the ending party was held in the restaurant upstairs.

More developers attended the closing party than opening one.

We enjoyed cool drinks, beers and a variety of snacks.

However, I felt hungry because of the lack of food

< We made pretty voices with the helium inside balloons. >

In the middle of the party, there was a sweepstakes prize for the attendees, and many people took the prizes.

I finished the BIC event for 5 nights and 6 days.

It was a very meaningful event and I had a good trip to Busan.

The demonstration received about 200 gameplay data and feedback on the UI / UX section.

As I watched the users play, I realized what I needed to improve.

Above all, I was deeply touched by the developer's passion.

I saw developers who scribbled user feedback in their notes while missing meals.

Thank you to all those who have traveled far to Busan, who have given support and advice to the indie developers!